As long as we have kept bees on Vancouver Island we have always anxiously anticipated the blackberry bloom because we are told they are the main flow. Â Over our first four years with bees, we have never seen the bees make honey on the blackberry flow, and rarely have we seen the bees working a blackberry flower. Â It’s a bit different this year, we now see lots of honeybees working the blackberry flowers. Â Are they going to make honey? Â So far the scale hive says no, it has been losing weight as the berries bloom. Â I was ready to give up on them, but while taking the photo above I realized that even though the berries appear from a distance to be in full bloom, in reality less than a quarter of the flowers are open.

Today the scale hive stopped losing weight after a week of steady drops. Â Maybe there is still a chance the bees will make more honey on the blackberry bloom. We can only hope.

We just got the website up and going over the last couple days, so, we have not bee blogging as the season progresses this year, will try to start doing that on a fairly regular basis from here forward.

The short summary of how the season has progressed this year.Â  We started our colony expansion back in February, by bringing in 3 New Zealand packages, and hiving them into 10 frame boxes.Â  We continued the expansion in April, brought in 3 nucs.

Our early season management was focussed around feeding the bees as much as they wanted and/or needed to give us a rapid population buildout.Â  That went well, and by the time May rolled around for the early berry blooms, most of the wintered colonies were in fine shape to produce honey, which they did in earnest over the month of May.Â  We moved a couple colonies to a local raspberry U-Pick for the raspberry bloom, and they filled 3 supers for us, while the hives that stayed here at home managed to fill 2 supers thru the salmon berry bloom.Â  The new starts all built well during this time, and by the tail end of the raspberry bloom, all of them had 2 boxes of 10 frames, fully drawn out with comb, and were starting to draw comb in the first honey super.Â  The new starts will be in good shape to help with our honey harvest from the late summer flow. 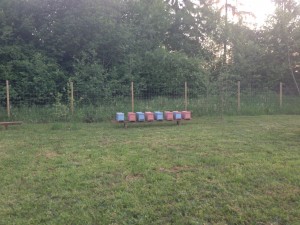 The other avenue we started to persue during the month of May was the first year of planned queen rearing, which turned into a significant learning experience, but we did well on that part too.Â  We harvested brood frames from the wintered colonies to populate mating nucs, and by the time May was over, we had 8 more new starts on the stands with fresh young mated queens.Â  Our goals for these colonies are modest, we just want to see them build out in the 5 frames boxes to get 2 stories of drawn comb so they can winter in the 5 over 5 configuration that’s worked well for us in the past.Â  These colonies are not intended to contribute to the revenue this year, but, they will come in handy next spring to replace any losses in the full size colonies, and any surplus over that will be used for populating the mating nucs again next season.

The first harvest is now in, and will be bottled in the next week or two, final schedule awaiting the new labels for the honey jars.

So, now we have our website starting to look useable.Â  It will be a short time before we have all the information fleshed out, but, it’s coming.Â  Other than working on a website, it’s a very busy time of year.Â  We have just finished cutting the garlic scapes, we have new queens in mating nucs, and the new permanent farm gate stand is under construction.