For the last couple of years, the hive scale has been located in the back yard, within reach of an extension cord.Â  It’s not the greatest place to keep a hive considering the back lot where the rest of the hive stands is well fenced, the back yard has no fences.Â  We’ve been lucky in that yogi has never discovered that hive and taken it apart.Â  But last fall we ran conduits out to the back lot for another project, so while we were at it, I had a power plug installed in the first row of hive stands, preparing to move the scale hive into the back lot with the other bees.

We made the move on Jan 10 of this year.Â  After the move I’ve noticed the scale data has become somewhat erratic, and looking carefully, the large gains and drops seem to correspond to when it’s raining.Â  I’m going to re-visit the scale setup, I suspect it’s catching water during the rain, and possibly running back inside instead of off the front lip of the entrance, that would explain the sudden gains of a few pounds during each rain event.

The scale has turned into an invaluable resource helping us understand what is going on with our colonies thru the season, and it’s never shown the erratic readings during rain event in the past, so, it must be something about how we set things up after the move to the back lot.Â  Yet another chore to add to the never ending to-do list.

Today the bee projects were minimal, just one chore that takes only a few minutes.Â  I wanted to know if the bees are taking to the patties we put down on the weekend.Â  It’s only been a couple of days, but, I tend to be the curious type, and always want to know if the things I do, are having the effect we want.Â  Here’s what they look like a couple days after putting the patties onto the hives. 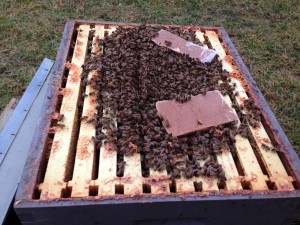 At this point in the season, we aren’t trying to co-erce the bees to build to rapidly, but, we do want to ensure they dont run out of nutrition between now and the first real flow.Â  Today was cool, minimal flying, and I didn’t see any pollen at the entrance like we saw on the weekend, and that’s the whole rub at this time of year.Â  Once they start bringing pollen in the first time, they will start raising brood, and we dont want them to run out of feed for that brood when a few days of cold keep them confined.Â  Two weeks of strait rain, not exactly uncommon or unexpected in this area, at this time of year.

But I look at this photo, it’s clear, the bees are interested in the patties, and starting to consume them, not at a tremendous rate, but they have made small dents all around.Â  And considering it’s still January, I’m quite pleased with the size of this colony at this time of year.Â  This batch will be boiling out of both boxes well in time for our first flow.

Yesterday we made up fresh patties for the bees anticipating nice weather today. Today we started opening the hives and putting in the feed. I was happy with the hives overall, some looked very strong, a couple had small clusters but still looked not to bad for the time of year. I took photos on the first hive we opened, which turned out to be one of the weaker colonies. 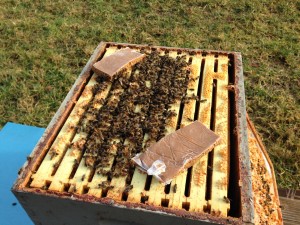 Overall a good day. Besides feeding the bees in the back, we started prepping more equipment anticipating more packages next month. We want to expand more than is realistic from splits this year, so we will start 10 more colonies from packages as soon as they are available. Stan at the Flying Dutchman in Nanaimo will provide them again this year. Barring a catastrophe in years going forward, this should be the last time we bring in spring packages.

It’s the third week of January, and most folks still consider this hibernation season for the bees. BUT, the weather is warm, bees are flying a bit mid day, and the natural pollen is coming available. I thought it was early when I saw the hazelnut tassels last weekend, but, checking back in the records, it was only 4 days earlier than we had noted last year. With pollen starting to come available, it’s time to start thinking about patties for the bees.

We can read endlessly online about the variations between results with different types of spring feed for the bees, but when you do, on thing will stand out clearly. The bees that get fed, will prosper, and those that dont get fed, not so much. The difference is huge. Now comparing the results with different bee food formulations, we can agonize over the minute details endlessly, but, what we eventually realize is this. As long as what we feed is a ‘decent’ pollen substitute, the variations between the different substitutes are small, as compared to the ‘feed / no feed’ variation. In the end, practicality will trump some of the minute details, and practicality say, we have to feed them what we can get locally. Our operation isn’t large enough to bring in large quantities of special order bee food. The other practical detail, we need to be able to present it to the bees in a manner they can consume, and not many folks will argue with the statement that ‘fresh patties’ are the best way to present food to our bees. So, it’s time to make patties.

We aren’t feeding a large number of colonies, so, no need to set up shop in the garage with special mixers, this is a task we can do easily in the kitchen. I have a sack of BeePro in the garage, purchased thru local bee supply sources. Digging around online, lots of folks will suggest different ways to present it to the bees, but the best I have found is in post on Beesource. It’s a simple recipe that scales easy to working in the kitchen.

To make a small batch in the kitchen, I’ll assume you have a kitchen aid stand mixer or the equivalent. Start by dumping a 2 kilo sack of sugar into the mixing bowl, then add 1 liter of boiling water. This part is really easy to measure out, because most kettles these days have markings, so it’s easy to dump in roughly a liter. Mix it well, and you will have a bowl of warm 2:1 syrup. Now add to that 1.25 kilos of BeePro and mix. I dont want to fuss all the time with the scale measuring it out, so I did it carefully once, it works out to roughly 7 cups of beepro. Mix well, and you will end up with a slurry about the consistency of a chocolate cake dough, and it _just fits_ in the mixing bowl. Pour it into an empty ice cream bucket and let it sit overnight, it’ll thicken up to roughly the consistency of peanut butter.

Then tomorrow, it’s really easy to make patties. Lay out some wax paper on the counter, pour the mix onto that wax paper, you will likely need a spatula to get it all out of the bowl. Put another piece of wax paper on top, then use the rolling pin to flatten it out to a hight you can work with. Now get your handy dandy pizza cutter out, and cut it into pieces appropriate for use in the hives.

For our first few rounds to go on, I’ll make the patties fairly skinny, so they fit between the inner and outer cover. This allows me to put them on, without breaking seals on the inner covers. I’ll leave that till mid February, at which time we’ll pop off all the inner covers and take stock of how our bees survived the winter. For now, we are just going to give them a good jump on getting started with spring brood. Last year we noticed activity on the scale hive already by Feb 10, and when we opened them to look, I found capped brood. That told me, they started the brood already in late January, roughly around the time we saw the first hazelnut tassles. So now we know, moving forward, when we see hazelnut tassles, it’s time to start thinking about protein for the bees.

I know many reading will immediately start to say, it’s to early to feed bees here on the west coast, but, I disagree. If you were at the BC Honey Producers Association annual general meeting last fall, and watched my presentation on how we used the scale hive data to target a specific flow, then the math following will make sense. It’s relatively well known, the bees will start to produce brood when pollen becomes available, but, we also know, if they go for periods without being able to fly, they will start to cannibalize that bood to recover the protein. Our goal is to ensure that once they start brooding, they never run out of protein to support that brood. Last year, the goal was to get the spring buildup started by Feb 21, so we would have 3 complete bood cycles before the main flow arrives. This year, with some of the hives, we are going to do it a little different. Our target for these hives is the maple flow, I want them up to strength for a flow by the first week of April when the maples are in full bloom. To get them up to strength early like that, involves using the same concepts that folks headed for Almond pollination in California use, make sure the bees are fed early, and induce them to brooding up early. The risk we take, is a cold snap in February could cause the cluster to shrink, and we’ll lose some brood to chilling. That’s a risk, but, we wont lose any brood if there is none to chill, so it’s time to start getting protein on the hives. We are 9 weeks from the first maples, and that’s enough time for 3 brood cycles. The first brood is replacement of the winter bees, the second is expansion to fill one box, and the third will fill the second box. My goal this year, double deeps with 18 frames of bees by April 1.

Of course, this will have huge ramifications for managing these colonies thru April and May, we are going to have them up to swarm strength a month earlier than what is typically considered swarm season in this area. I have a plan for that, so stay tuned, and by the end of May, we’ll know if the plan worked.

It’s an early start, and, I think it’s going to be a fun year. This will be our second year managing the bees to target a specific population size timed for a specific flow. We are targetting maples with 1/3 of the colonies, and will be targetting the salmon berries and thimbleberries with 2/3 of them. And in between all of this, we will raise a whole bunch of queens this summer too, it’s going to be a fun season. 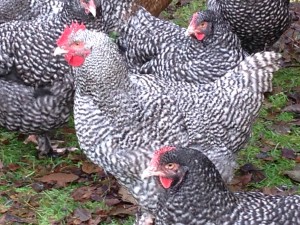 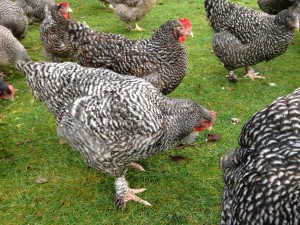 Chick hatching season is almost upon us. I have some fencing repairs to be done and need to separate out the first breeding group. Looks like we will be ready by the end of January. Last year we hatched from January through August but I won’t be doing that again this year unless demand requires.

We _only_ raise Coucous de Malines chickens and focus on health, conformity to standard and temperment. Quality over quantity.

Our birds are fed exclusively on non-GMO feed, garden scraps and free range over half of our property.