Last year the hive on the scale didn’t do as well as most of them. We had an endless litany of problems with that colony. During the inspection in late March just as the maples were starting to bloom, I found queen cells, and it appears they raised a new queen far to early in the year. In mid April, that new queen was walking on the frames and laying some eggs, much to my surprise, there was worker brood present, so she did manage to get mated, altho not well mated, there was as much drone brood as worker brood in a fairly small colony at the time. We tried to ‘fix’ this colony by placing a ripe cell in there from the first round of grafts here. I marked the queen in the colony, then placed the cell. 3 weeks later when I looked, no sign of a marked queen, but there was an unmarked queen walking on the frames, and it finally looked like a decent brood pattern, I expected them to recover. A month later, yet again, ripe queen cells on a frame, no eggs, so once again they were requeening. Doubtful they swarmed, if they had, I would have seen it on the scale data, and I dont think they had enough bees to produce a viable swarm. I stopped trying to ‘fix’ the colony, and let them go thru another re-queen cycle on their own schedule.

By late August, the colony looked ok, and they were packing on some winter stores. In a year that had a very good flow, other colonies in the same yard filled top deep and two supers, this one did eventually fill one super, which we left on for winter stores. In October, disaster yet again for this colony, walked out to the bee yard one day to see it laying in pieces on the ground. Something had knocked it off the stand. Most of our colonies are strapped, but this one was not due to the problems of getting a strap around it that wont interfere with the scale setup. They were obviously not happy that morning, but I carefully stacked all the boxes back up, not much else you can do at that time of the year.

In February, when we opened hives for the first round of spring patties, the colony was alive, but, barely so. A small cluster of bees with a queen, lots of honey, no brood. The colony was maybe the size of a softball, which really isn’t a large enough cluster to kick of spring brood that early in the year. The colony next to them was in very good shape, 7 frames of bees on Feb 12. My real concern for the colony on the scale, they were to small to raise replacement brood, and likely unable to defend the entrance with honey in two boxes still. But, not a lot we can do to help them in February other than reduce the entrance and hop they make it.

Yesterday in the bee yard, we saw they had finally recieved the coup de grace. The large colony next door on the stand was busy robbing out the colony on the scale. I opened them up to check, as I suspected, a tiny cluster in the center, all dead, with a dead queen in the midst of them.

There is an old saying, to the winner goes the spoils. This afternoon I did some re-arranging in the bee yard, and now that colony that successfully robbed out the hive on the scale, is mounted above the scale. A few resets in a database, and now we are starting fresh with a new dataset for a new colony in 2018

So 2018 bee season is now underway. Our first round of feed is pretty much consumed, and the second round they have made a big dent in already. Most of the colonies that didn’t get hit by our 4 legged visitor last fall are looking good. An example. 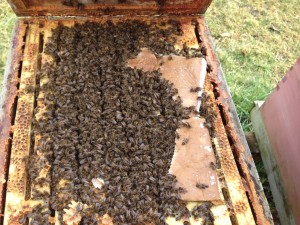 It looks like the patty is incorrectly placed beside the cluster. In reality, the first patty was directly over the cluster and the second round went on beside the first before it was finished. I took this photo just before I placed the third patty onto this colony.

We had an incursion by a 4 legged critter last fall. 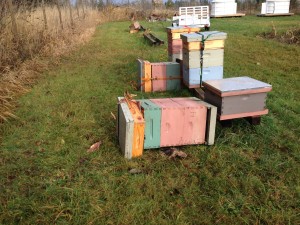 Not sure how long they were laying on the side like that, it happened while we were gone for some days. For those colonies that did get hit by our 4 legged visitor last fall, packages will be arriving this Saturday, March 3. I didn’t expect any to survive, total of 6 knocked over. 2 are still alive, 4 were dead by December.

Other events as we approach the new season, the bee truck has been upgraded. The Ford Ranger was a decent truck, but, I’m a tall person, and that short cab was problematic for my long legs. We now have a ‘new to us’ 2000 Toyota Tundra in the parking lot, ready to approach a season of moving bees.