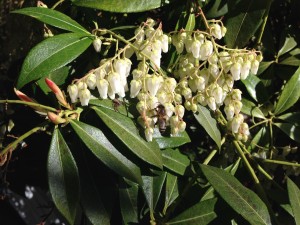 The bees have finally found the peirus in front of the house, I think this is a sure sign that spring is upon us. Until now, checking on the bees has meant lifting a lid to see what the cluster looks like, and adding feed as necessary, we haven’t been going deeper than that into the hives. The photo was taken yesterday, and it shows we were having a nice warm day, temps were up at 17C, so it was time for the first look inside, lets see how the hives are doing. At this time of year, the long lived winter bees are near the end of their life, and it’s very important we dont chill any of the brood, so we aren’t going to be lifting frames out to look with temps below about 14C. On a nice warm day tho, it’s time to see how they are doing.

First inspection in the spring is very cursory, and very quick. It’s important to not re-arrange frames in the nest area, altho I may move a honey frame in closer to the nest. Essentially we are looking for just a few things.

a) Is there worker brood in progress?
b) How much brood is in the hive?
c) Is there enough food available to continue feeding brood?

I look far enough to see there is viable brood, and once I’ve confirmed that, at this time of year wont go farther unless I see something that makes me want to look deeper. We can check a frame for brood in 10 or 15 seconds, no need to go hunting for queens or such at this time of year, we dont want to set the colony back by chilling the brood.

So what did we find, use this colony as an example. A sneak peak from above sure looks nice for a wintered unit. 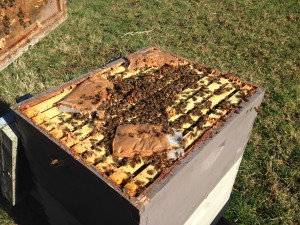 But looks can be deceiving. When I lifted the first brood frame out of this colony, to my horror, it was full of drone brood, as was the next frame beside it. As nice as it looked from above, this is a dead hive, they have no viable queen laying fertile eggs. On digging farther, I found no queen at all, and I’m pretty good at finding queens. I did find multiple queen cells in various states of disrepair, so obviously they have tried to make a new queen, didn’t succeed and now it’s a laying worker situation. What a shame, for our area, that’s a decent looking spring cluster. Then we have the hive beside it, a patch of worker brood on one frame, small patch, and I saw a queen walking over the brood, but there is only at most 1 frame of bees in that one. Another shame, nice looking queen but not enough bees with her to build up a viable hive, so another hive that’s dead, they just dont realize it yet. I got a sheet of paper and did a newspaper combine. Hopefully the queen from the tiny one, combined with the bees from the larger one will join together and produce one viable hive.

Other colonies varied from 2 to 4 frames with capped brood. Not as far along as they were last year at this time, I’m blaming that on the endless rain and cold we’ve been having. Most of the colonies are still working on the patties from the last round, there are a couple that’ll get another patty this weekend. I was expecting to see them farther along, but, that’s not how it’s going this year so far. Populations still look fairly similar to what we saw a few weeks ago, but there’s plenty of capped brood in the frames no, so I expect we’ll start seeing colony growth over the next couple weeks. I’m sure a little warm weather would help a lot, but we cant control that.