A few years ago I was intrigued by much of the chatter online regarding various ways and means of co-ercing the bees to build more comb, faster. One premise that I read over and over, bees will build foundationless faster than building on foundation, and they will only build comb on plastic if absolutely forced. I did a very crude little experiment to test this hypothesis for myself. Granted, my experiment was not statistically significant, N=1 is not a valid statistical set, but, this was rather enlightening for me. My method was simple, very simple, present the bees with the foundationless, and plastic foundation, on the same frame. The test setup 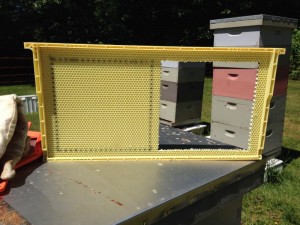 Some time later, we removed the frame from the hive and took a photo. 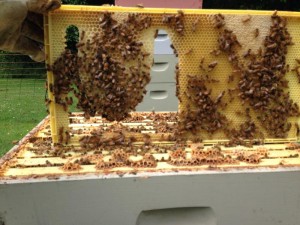 A quick measurement of how much comb we found in the empty space, and how much was on the plastic foundation gave me the answer I was looking for, and that answer was, no appreciable difference between the two halves of this frame, placed in this hive.

This last weekend we attended the BCHPA annual meeting and the associated education days. One of the sessions I sat in on was a presentation by Randy Oliver describing the correct way to go about a real ‘experiment’ and produce acceptable valid conclusions. My simple comb building experiment was essentially ‘all wrong’, about the only thing right with this one, indeed there was a test case, and a control, subject to identical conditions. That part was easy, the test and control were both on the same frame, placed in the same hive. the result isn’t truely valid because we had only one frame in one hive, so, no other hives replicating this result, and N=1 is not a valid statistical answer. But I also learned, this would be a relatively strait forward experiment to repeat, but, in a more formal manner to produce a result that would be accepted as a real ‘practical research result’.

For those that know me, they know I am big on doing applied research to get practical results that have implications for our business. Next season, during the main flow, we will have more than enough colonies building in 4 over 4 nucleus configurations to repeat this experiment in a manner that can generate a statistically significant result.

The question we asked before, will bees build more comb in a foundationless frame than on a frame with plastic foundation? Randy would say, the correct answer is ‘I dont know’, because we dont have data to show a definitive answer. I have _some_ data, but not enough to be definitive, so I’ll qualify my answer as ‘I dont think so’, but now I’m a bit inspired to produce a real answer, and this is a real answer that’s easily within reach. I’ve got 6 months to write up a proper experiment protocol which can be executed next season during our spring flow, and produce a real answer to this question.

This is going to be fun….