It’s raining today, coming down hard, so we aren’t working in the yard.Â  Over the last few days we are starting to hear from various folks around the valley as they start peeking into the beehives to see how winter survival has taken it’s toll.Â  I’ve had more than one message and/or email from folks concerned about winter losses, and it’s a very typical scenario.Â  3 or 4 colonies went into the winter looking good, and now there are two or three left alive, everybody has one or more colonies that didn’t survive the winter, but also have a couple that are looking good.

There is a really important detail to remember at this time of year though, just because the colony looks good when you pop the lid and see 3 to 6 seams full of bees, it’s still February, and the winter is not over.Â  Queen failure season happens thru the month of March.Â  We have experienced this ourselves, a colony that looked really good when we started the feeding program in February, come middle of March when doing the first inspection that involves pulling up frames and checking the brood, to our horror we see 2 or 3 frames of capped drone brood and a queen proudly walking on those frames.Â  There are a lot of reasons the queen could have turned into a drone layer, my suspicion that in our climate, one of the primary reasons is that she got chilled over the winter and all of the sperm she is carrying became unviable.Â  I dont buy the ‘poorly mated’ arguement in the case of a queen that was laying good worker patterns in the fall, then starts producing drones in the spring.Â  If she was that poorly mated, we would have seen shotgun or drone brood already in the fall.Â  If she had a good pattern in the fall, and produces nothing but drones in the early spring, something happened over the winter to change her viability.

Another report that is all to common, a colony we thought was dead, turns out to have a small cluster of bees.Â  I learned this lesson the absolute worst way a few years ago.Â  We had a colony beside the house, and in December already we had started to think it was dead.Â  On the nice days, there was no activity at the entrance.Â  In February I popped the lid, and saw no sign of life, so I proceeded to start taking the hive apart for storage.Â  There was Gerry, no bee suit on a nice warm February day, with the top box in my hands after lifting it off, and that’s when I realized, there is a cluster of bees in the bottom box, and now they are very angry bees.Â  I took about 50 stings before I got away from the angry bees and went to find a bee suit so I could put that colony back together.Â  The lesson there, just because we _think_ it’s dead, doesn’t mean that’s the case, and if you are going to start disassembling the deadouts in February, have a veil on, full suit is better.

But back to the main issue today, the time to start planning for swarm control is now.Â  In general, swarm control boils down to two underlying methods.Â  I wrote yesterday about my aversion to spring splits in most forms as a method of swarm deterrence, it is a method that deters honey production as effectively as it deters swarms.Â  The other main strategy for swarm deterrence involves ‘give them space’.Â  The issue with this method is strait forward to understand, space does not mean fresh new frames with empty foundation, it means drawn comb that the bees can utilize right away.Â  For many of our local club members, the main problem is, they don’t have an inventory of drawn comb to work with during the swarm season, so they don’t have the option of working on a ‘give them space’ type of swarm deterrent strategy.Â  Putting a box of empty new frames doesn’t have the effect you are looking for, during May and June, the bees can’t build comb as fast as the nectar arrives, so without an inventory of drawn comb, you can’t stay ahead of the bees and the swarm becomes inevitable.Â  Once the bees start storing nectar in the brood nest empty cells, swarming is inevitable, and the only option to deter a swarm at that point is to do some form of split.

This winters dead hive, is your spring inventory of drawn comb to use for swarm deterrence.Â  The strategies we use are very unconventional, and fly in the face of what many of the online bee guru types tell us to do for managing our bees, but it’s a system that works well for us. 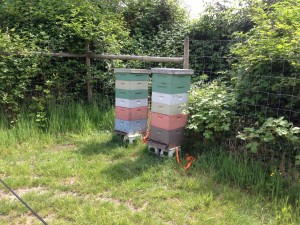 This is a photo of two hives we built up last spring using our ‘give them space’ methods.Â  Click on the photo to see a much larger version with more detail.Â  They are located in a small raspberry farm and working the raspberry bloom.Â  6 boxes in each stack, 2 brood boxes and 4 honey boxes over an excluder.Â  I stopped doing inspections on these colonies for a couple of reasons.Â  First reason, lifting 4 boxes of honey / nectar off to get down to the brood nest is hard work, and more importantly, with all 6 boxes full of bees, it gets downright scary by the time you have the 4 honey boxes lifted off the stack and get down to the excluder.Â  The bees get angry, and there are a LOT of them.Â  These colonies did not swarm, and we harvested roughly 100lb of honey from each during our first extraction cycle.

How did we manage this, in an area where typical honey harvests are much smaller, and do so at a time of year when the bees natural instinct is to throw a reproductive swarm?Â  It was not easy, and involved a significant amount of work, with planning that went back to starting our bee work in February with the spring feeding program.Â  But the real key is, keep ahead of the bees with comb during the months of April and May.Â  Around April 1 we start our plan to ensure they bees always have space to work, and the queen has room to lay.Â  The first honey super goes on above an excluder when we see the first sign of maples blooming as a way of ensuring there is always some place outside the brood area to store nectar.Â  At the beginning of April we start helping the bees to expand the brood nest, by simply adding more comb to the nest.Â  The way I do it, I take a mostly unused edge frame out of the top box, push 4 frames over to create a gap between two brood frames, then put an empty drawn brood frame into that gap.Â  The following week, I do it again, this time taking one from the other side of the box.Â  The first two rounds happen in the top box of a double deep stack, the second two rounds happen in the bottom box.Â  We continue this strategy until we see comb being drawn, or we run out of drawn frames to use.Â  Every time we see the same result, for the first few days the bees appear to ignore the new frame, but when I look back a week later, that frame will be full of eggs and freshly hatched larvae.Â  At the same time, we manage the area they have to store nectar in a similar fashion.Â  When 5 of the frames in the first super have nectar stored, I put on another box of frames.Â  Starting with the second box, we switch it up a bit, each box has 7 or 8 drawn frames, with the remainder being fresh new frames interspersed between drawn frames,Â  with the goal being more comb in the honey supers.

When it was time to put hives in the raspberry farm, I will admit, we cherry picked the two strongest for this location.Â  At the time we moved them, the one on the left had 14 frames of brood, the one on the right had 12 frames with brood, both had two honey supers on, and we added two more as the raspberry bloom progressed.Â  We had no reports of swarms, and based on population sizes when I did go into them, it’s unlikely they swarmed.Â  We used the same concepts for the hives here on the back lot, and I know there were no swarms from the hives we treated in this fashion, I can see them out the window of my office, so I would have noticed swarms coming out.Â  I did have a few colonies started from nucs we purchased in the spring, and I was out of comb for managing those.Â  I saw both swarms that came out of those, managed to get one into our own boxes, and watched one disappear over the trees.

Our methods are based on a very simple premise, ensure the bees have space to work in the form of empty comb both for the queen to lay eggs, and for the workers to store and cure nectar.Â  As we all know, the standing joke amongst beekeepers, ask 3 beekeepers, get 3 different answers to the same question.Â  There is no right or wrong way to do things, but we have homed in on a strategy we can apply consistently, which seems to give us a fairly consistent result.Â  Yes, it’s a lot of work, and involves doing a full deep look into every hive once a week from the beginning of April thru till mid June.Â  Our goal is to harvest 50lb of honey from the producing hives over the spring flow, last year we managed to get 70 as an average over all the producing colonies.Â  A couple were up near 100, a couple more down around 30, but the overall average was 70.Â  We were happy with that result.